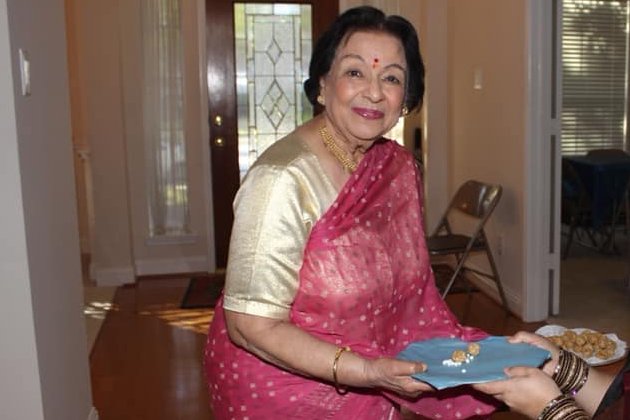 Copyright Visualomics LLC . You’re welcome to share this, but please link to this original article.

“A little thought and a little kindness…”

Penning down today to write about a special person in all our lives- she’s 88 years old but looks half her age. So many girls out here in Houston feel the same connection to her as I do. So today I am writing to felicitate Manda Maushi and thank her for her kindness and love that she has spread and shared with so many others like me. She holds a really special place in our hearts. 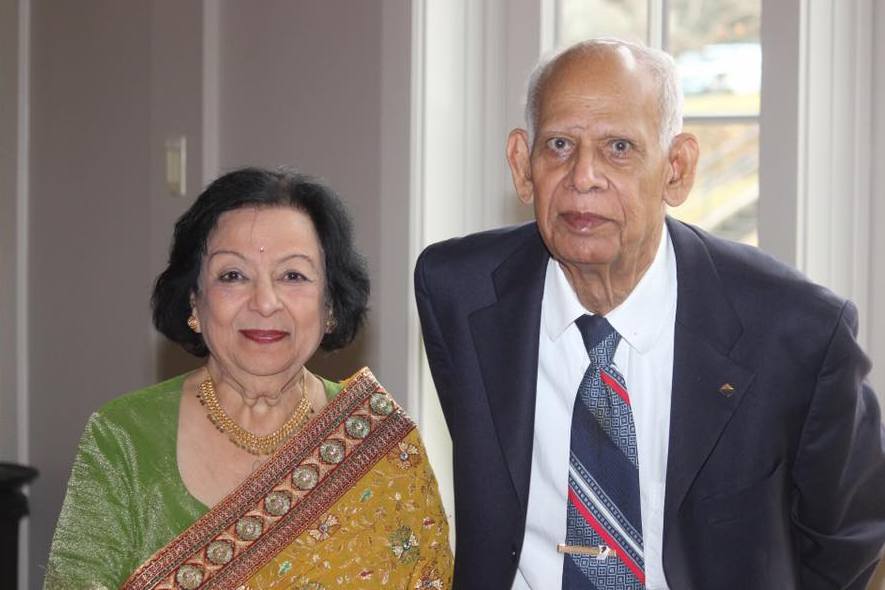 Manda Maushi as I fondly call her, (maushi meaning mom’s sister ) has been a reflection of my mom to me here far away from home. My first memories of Maushi are from when I set my foot in Houston way back in 2002. Manda Maushi and Kashinath Kaka were amongst the first ones who invited us over to their house to welcome me to this strange new city I am now a part of. I am pretty sure everyone who has been to their house would have enjoyed their warmth and hospitality as much as we did. Maushi’s cordiality, warmth, kindness just comes so naturally to her. She makes you feel so special and fusses over you with all her delicacies with a kind of royal demeanor and natural grace. When I visited her house, she made me feel so special by doing all the rituals that a mom does when her daughter comes home for the first time after marriage. On this then alien land, she was a ray of hope that gave me comfort and made me feel that her home was like my home. Since then we have met and visited her many a times and enjoyed many of her delicious dishes and I must say that her love has only grown over the years. 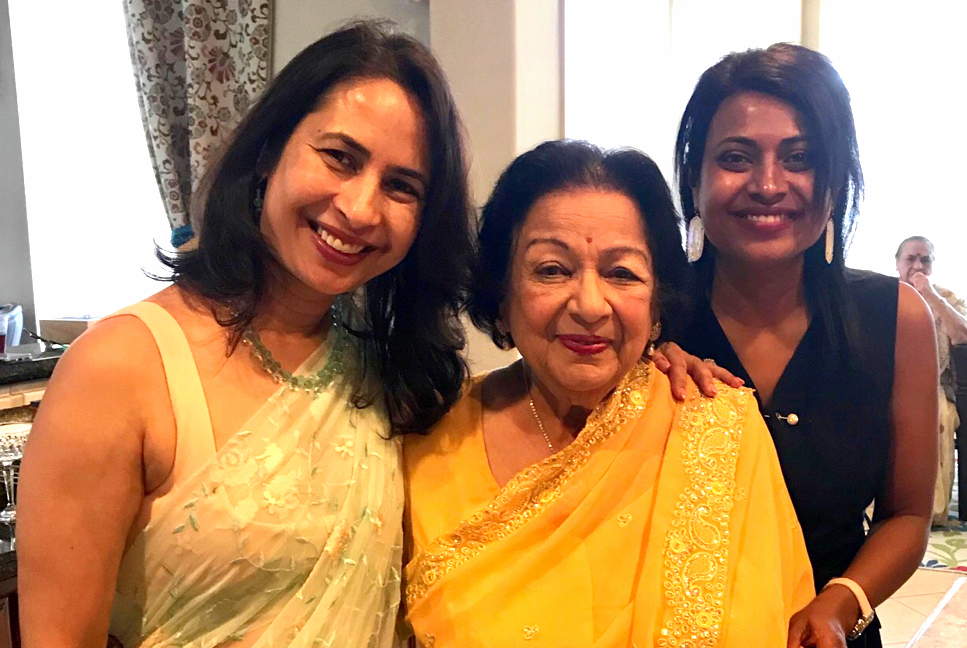 When I met Sonali didi in Houston she told me that she has experienced the same hospitality from maushi, years ago even before I came to US. Sonali didi and our families go way back from our childhood heydays. We have known each other for a decade, apart from the fact that we share the same hometown, Kolhapur, we also share the same army background, as both of our dads served for the Indian army. Not only were we childhood friends, now we both even share Houston in our married years. Sonali didi has always looked out for me and treated me like a little sister and that’s why I call her didi (meaning older sister).
Sonali didi messaged me that day to let me know she along with Manisha (maushi’s daughter) were hosting a small get together for Manda Maushi, it was almost like she was reading my mind. She asked me to interview Maushi and showcase some of her dishes. I felt so privileged. I have always been thinking about doing something for maushi, so when Sonali didi organized this event inviting the friends and people maushi knew for years, I jumped at the opportunity. 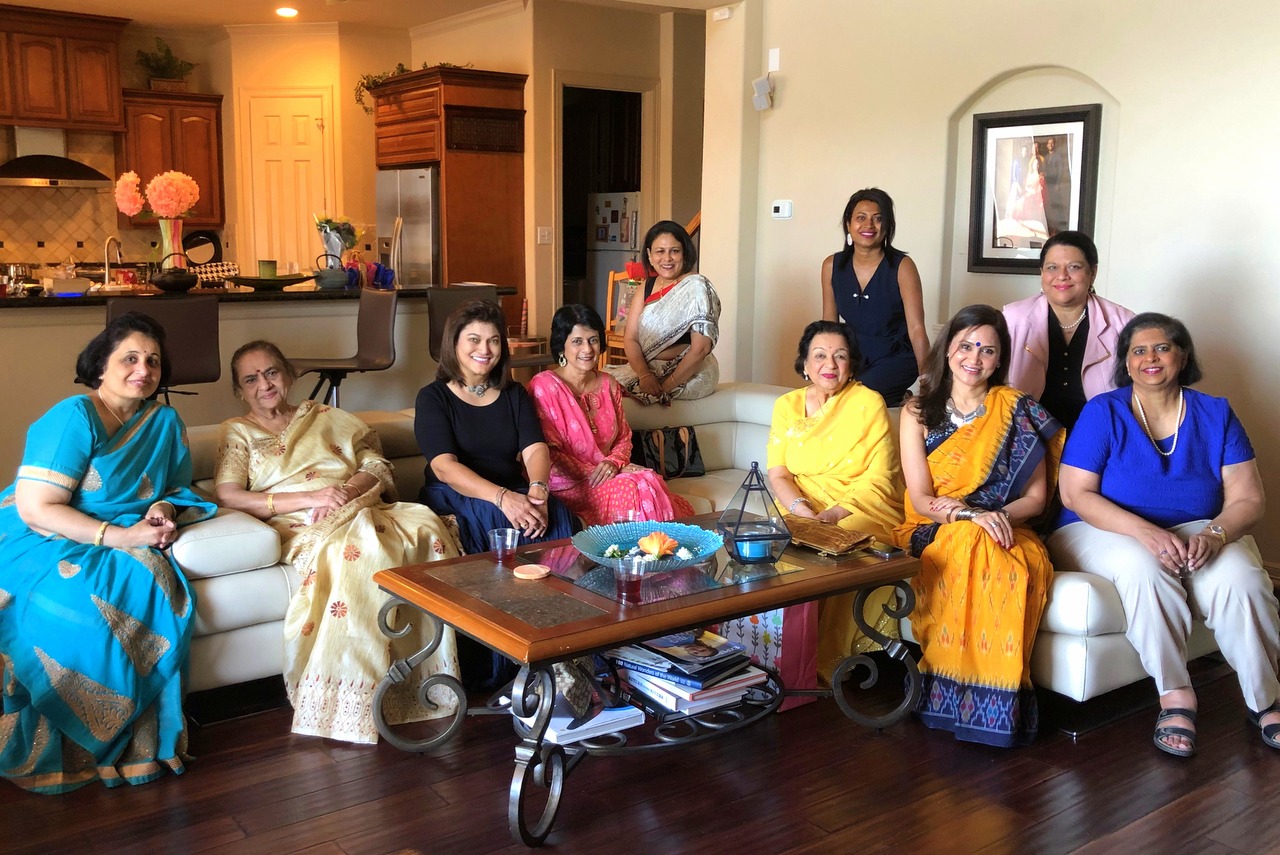 The event was called “ Brunch and Recipes with Manda Maushi”. Sonali didi themed the event “Elegant” as that’s the first thing that comes to our mind when we think of Manda Maushi. The event was to start at 11 am. I was running slightly late so when I drove in at around 11:10 am, Manda maushi was just getting out of her car, helped by her daughter Sheela. Maushi, as usual, was royally dressed, draped in a beautiful bright yellow chiffon saree that perfectly matched her mood and personality. I greeted her and Sheela and then followed them inside the house. Some of the invitees had already arrived and all of them looked stunning. 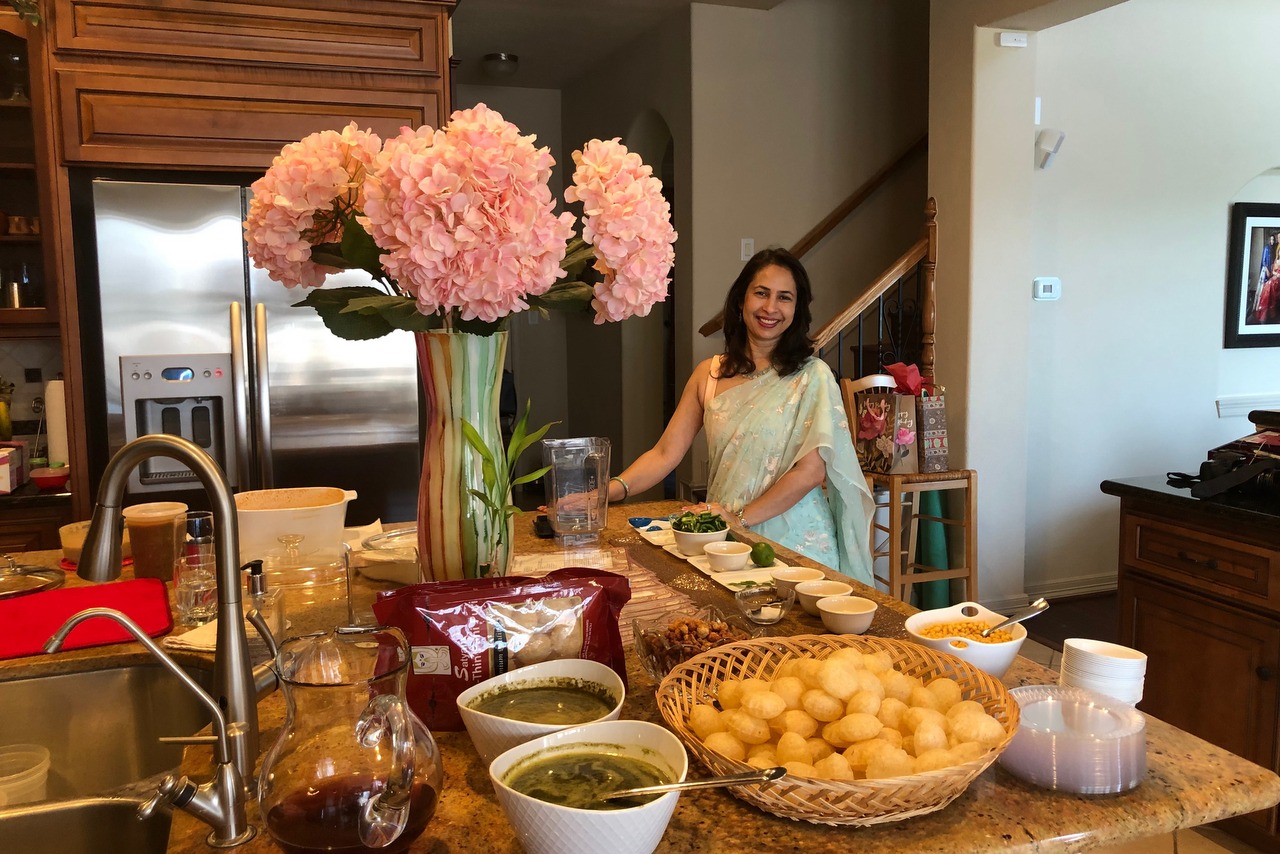 The house was looking immaculate and was beautifully decorated, the kitchen was smelling aromatic and was quite brunch ready. Manda maushi was showered with lots of flowers and gifts. While we all settled in and waited on other guests to arrive, Sonali didi being a perfect hostess as she always is offered us some delicious kokum drink (drink made from kokum fruit) and then introduced all of the guests to each other. We all spent a few minutes getting to know each other and taking a few pictures with maushi. 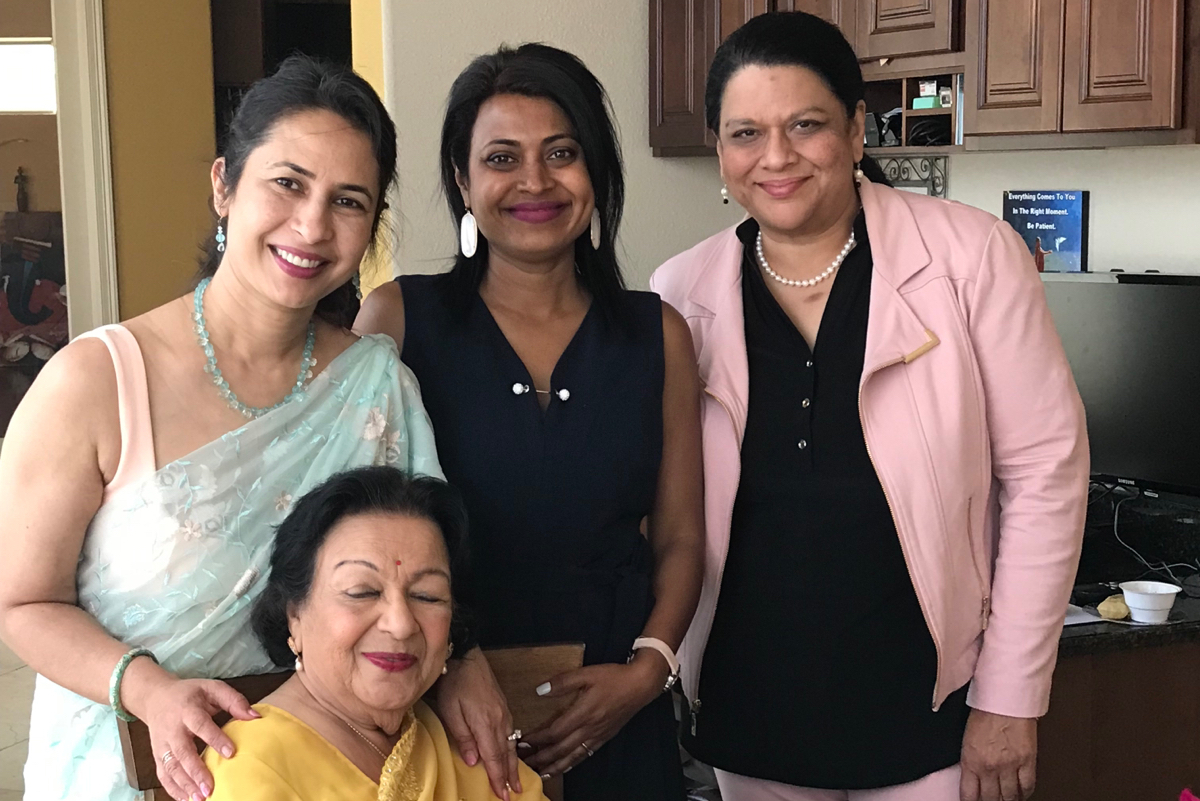 Just about 11:45 am or so when most guests had arrived we started the event. Sonali didi gave a short emotional and heartfelt speech for Manda maushi that brought tears to our eyes. She spoke about her experiences with Manda maushi in the years that she had known her and told us how dear maushi was to her and expressed that this event was a just a small way to thank and celebrate maushi. She then handed me over the reins and left it to me to take it on from there.
After didi’s heartwarming speech there was little that was to be said and honestly, Manda maushi needed no introduction as she is legendary in Houston. Everyone sitting in front of me had known her for years. I started out talking about what she meant to me and why this event was special to my heart and since we all were curious to know what maushi and her life was all about, I asked maushi to let us into her childhood memories. Almost instantly I saw maushi lit up, a shy person that she usually is, looked more comfortable and keen in telling us all the stories that have been so dear to her and were probably unspoken, ready to be revealed. 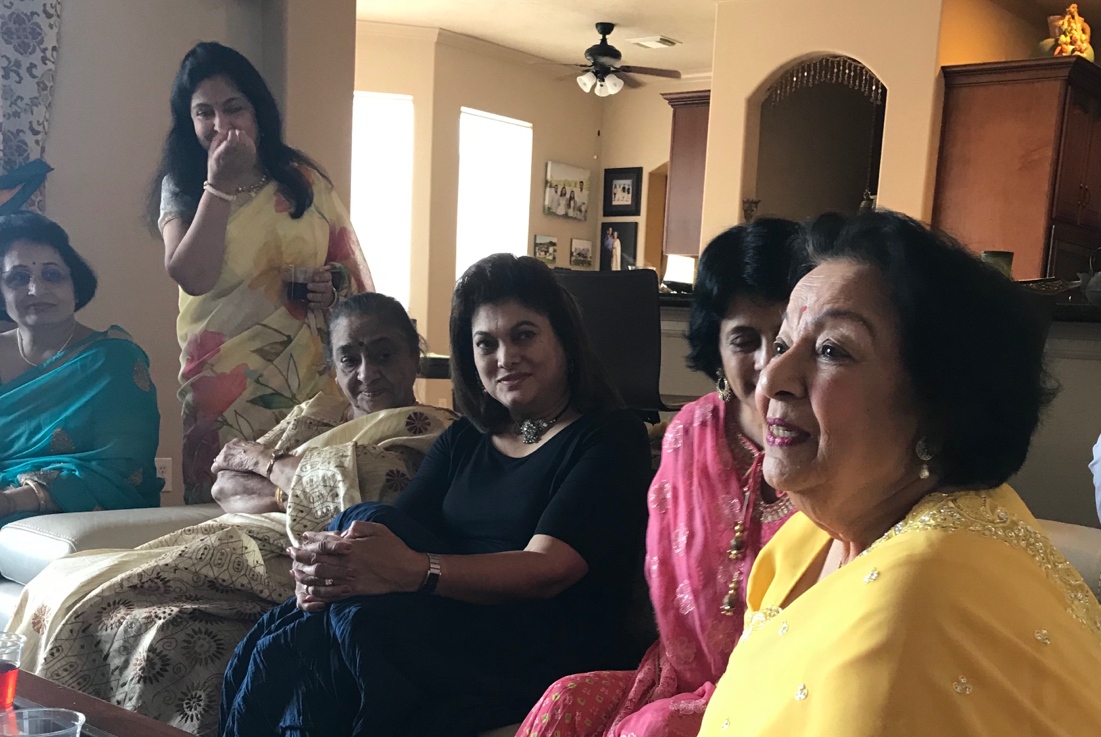 Maushi cleared her throat and finally broke her silence by first thanking Sonali didi and then all of us for organizing and bringing this event about and for making it so special for her. She spoke about her three daughters, and how proud she is of all of them and their achievements, two of them, Sheela and Manisha, were present there. She then spoke about her husband Kashinath Patil kaka and his achievements and how he had taken care of her as a husband.
She finally took us down her childhood memory lane that were so precious to her. She spoke about her father Shri Shridhar Shankar Rao Shirke and his achievements that meant so much to her, her 5 other siblings and the times they all spent together. When she spoke about how her mom passed away when she was just 10 yrs old, her eyes became wet with tears as she spoke about that accident and told us how life wasn’t the same ever after that.
We then saw her smile once again and her eyes shone as she drifted her conversation to those times when her father started working for Maharani (Queen) Chimnabai Gaikwad from Baroda who eventually moved to Pune. From the sound of her tone, we could tell that those were some of her happiest days as things started to become more fun. They accompanied the queen in her frequent work trips to Mahabaleshwar and Mumbai which were more like a staycation for her family. She had fond memories from those trips. She also told us that the queen was fond of her food, especially her shrimp curry and she would often come to her house to taste her delicacies. None of this surprised us at all, as once you try maushi’s shrimp curry, the flavors linger in your mind forever.
After her childhood life, she moved on to talk about her married years. Her marriage was an arranged marriage and she accompanied Kaka to Purdue, Indiana in US where he arrived to pursue his Master’s degree in 1958. They lived in Indiana, Tennessee, New Jersey, Pennsylvania, and eventually settled down in Houston, Texas where they raised their three daughters. She talked about their struggles during those times, since traveling around locally was such a challenge. Buying a car in those times was quite expensive. Indian grocery stores were miles and miles away so stocking up the pantry for an Indian household was an adventure in itself.
Manda maushi has always been very passionate about cooking and gardening and she pursued both these hobbies very ardently. She told us about some of her culinary achievements when she was interviewed for local newspaper for an article on Indian food and was on the local television as well to demonstrate making of puris. To sharpen her gardening skills she had joined a garden club and won several blue ribbons for flower arrangement. 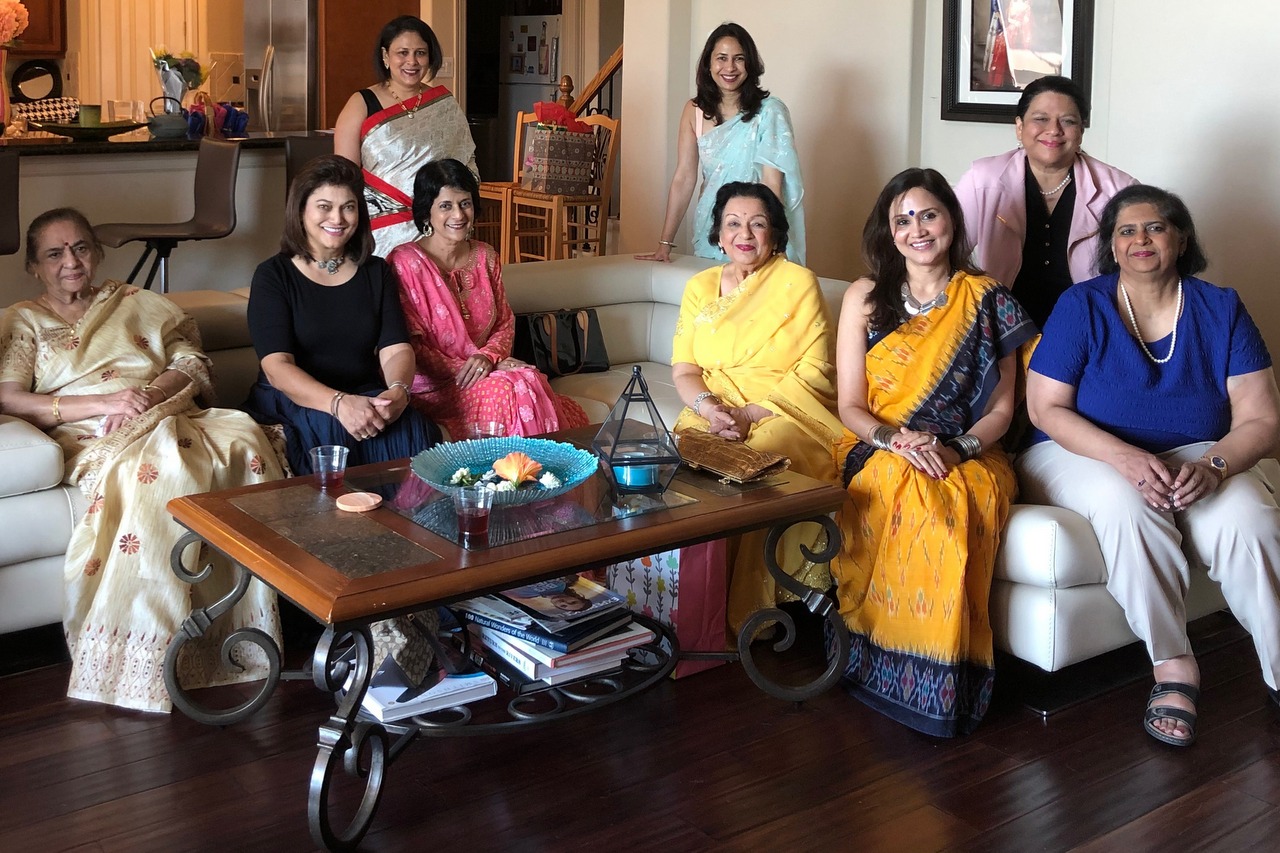 She started wrapping up her conversation by telling us about how fortunate they have been to meet wonderful friends who helped them adjust their lives here in America and now these friends were more like a family to them. She politely and graciously thanked everyone once again for being a part of this event and giving her all the respect. The moment was quite special to all of us. Everyone was asking her questions every now and then trying to know more about her and her life. We asked her a few more questions before ending the conversation session to move on to Manda maushi’s much-awaited recipes. 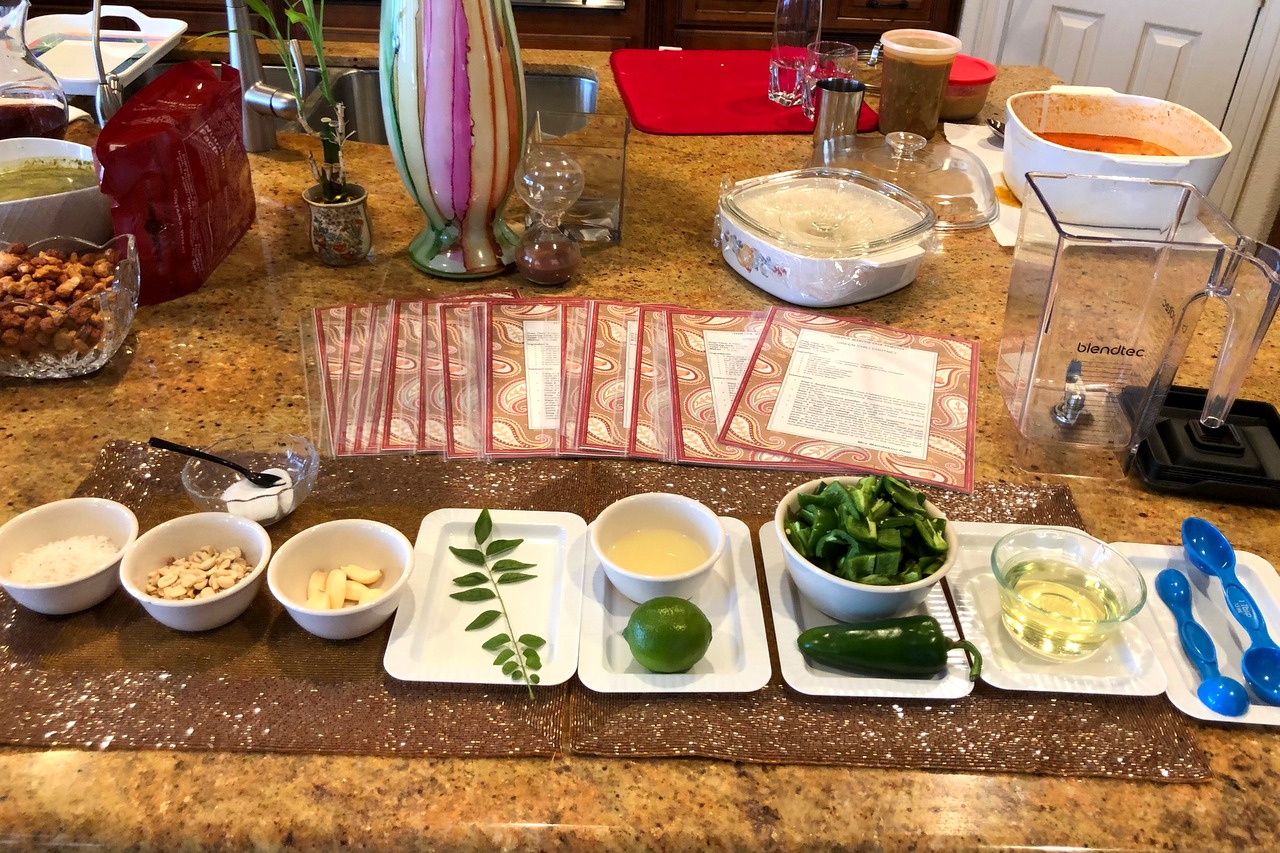 Next, Sonali didi had planned a recipe demo. Maushi was going to showcase a quick demo of one of her recipes called Hirvya Mirchi cha thecha aka green chili chutney. Everything was “mise en place” meaning everything was prepped, set up and put in place. Maushi gave us a live demo of how the dish was made. The dish came out really delicious. 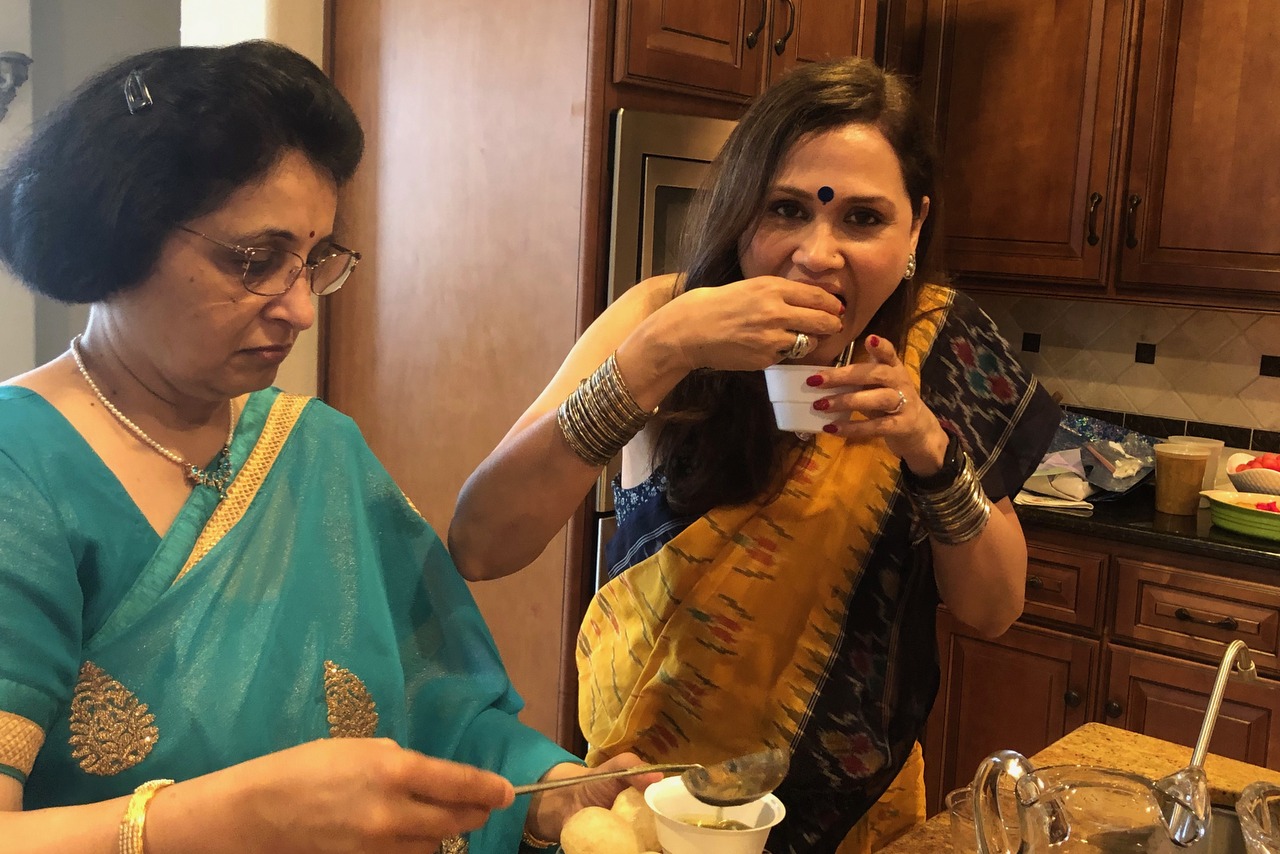 After the demo, it was time for some taste testing of the dish and the delicious food that Sonali didi had spread out. We had some mouth-watering pani-puri to start with. We innovated and tried maushi’s Hirvya Mirchi cha thecha along with the pani-puris, usually, the Thecha goes with bhakri or roti (Indian flatbread). On the food spread, after pani-puri, we had some soft, spongy idlis and sambhar to dunk the idlis. 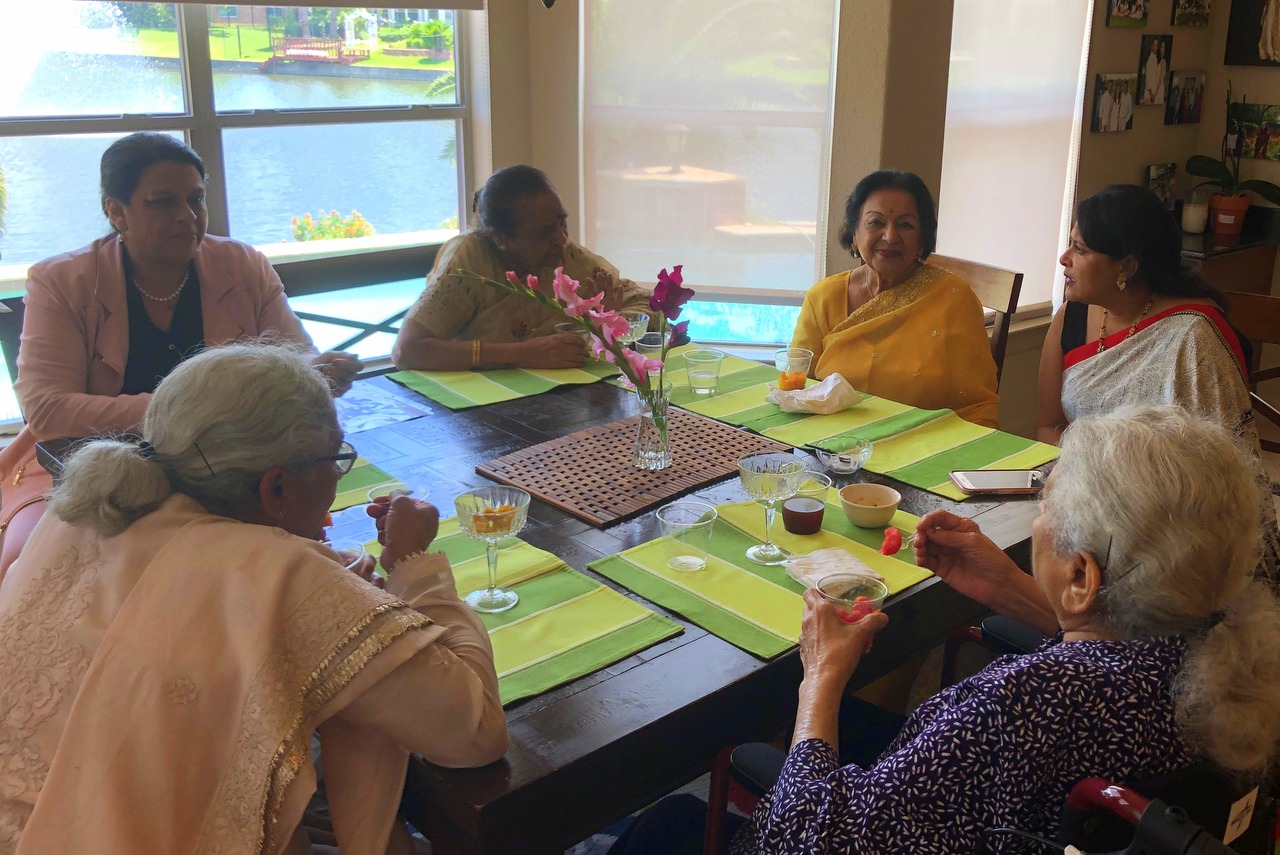 Last but not the least Manda maushi had surprised us by bringing her most talked about shrimp curry along with her that she had made especially for us. Despite of all of us telling her not take the efforts to make anything, as we wanted this to be special day for her she took the pains to make it and let me tell you, the recipe to make this shrimp curry has no short cuts like we come up with these days to make our life easier. When maushi makes the curry everything is from scratch and every step has to be followed in the right manner. Taking those efforts to see some happy faces, that’s what makes Manda maushi so special, and that is the reason why we were all here to celebrate this kind-hearted person. I think I might do a video of this dish one of these days soon. 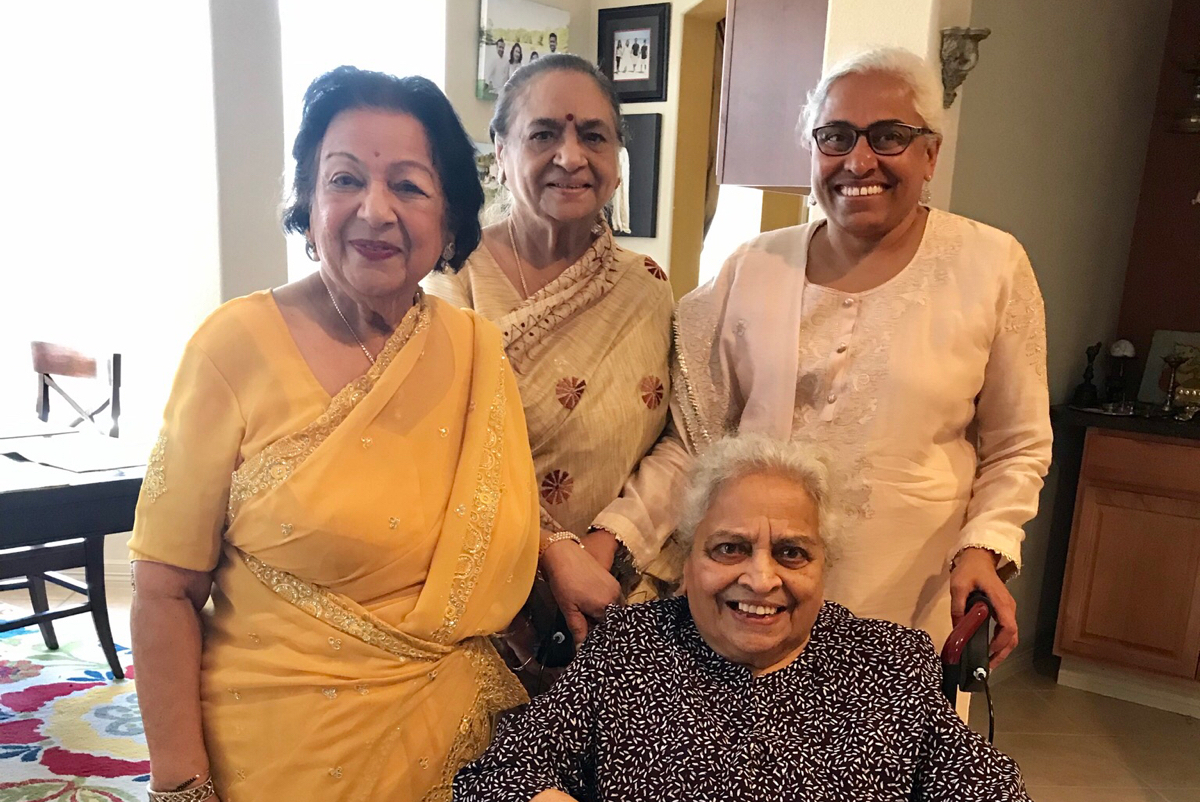 Well, we ate all the delicious food, had some interesting conversations, took some pictures with each other as well as of the delicacies around. To end the meal we had some mango halva that was simply delectable, made by one of the guests. 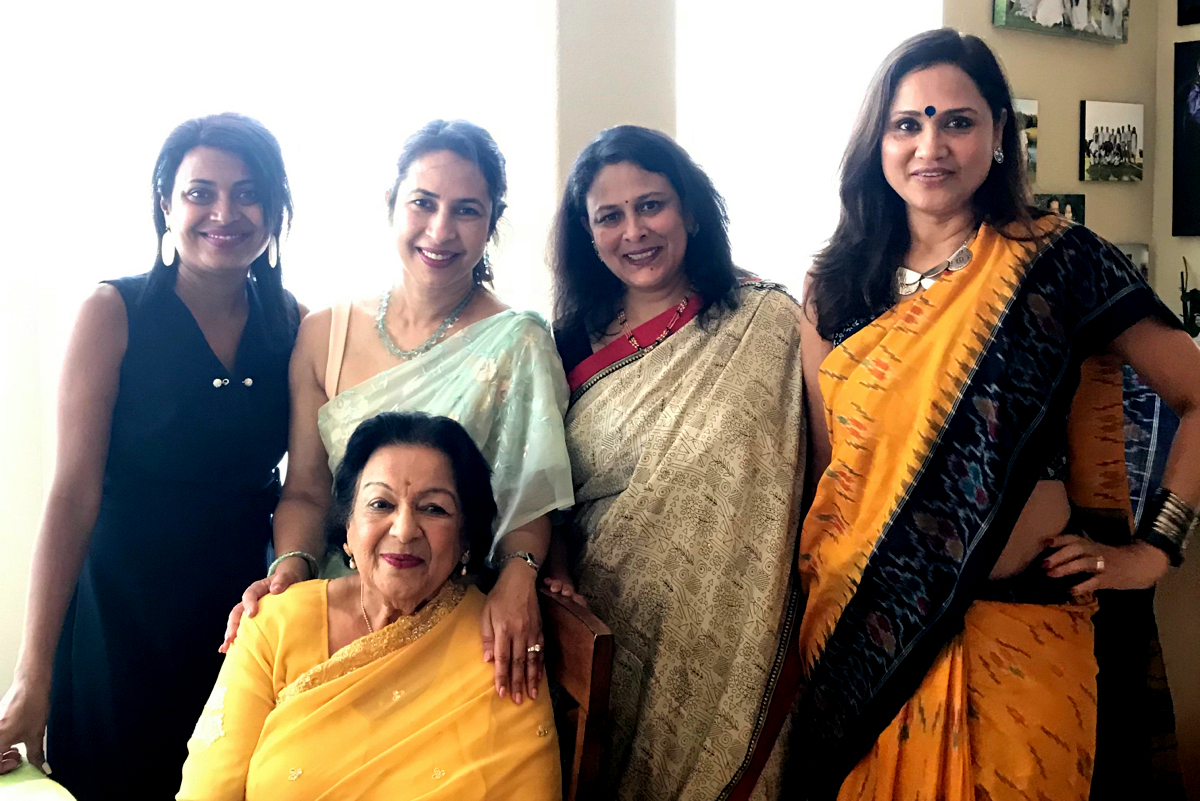 As the event came to an end we said goodbye to each other taking home sweet and special memories of Maushi as well as of the people who we had met that day with promises of keeping in touch. I took blessings from Maushi. Thank you Sonali didi for a lovely time and great food, and for hosting this occasion. This event truly was a memorable one.

We believe everyone can be a great chef. 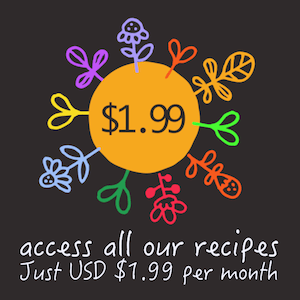 Join Now and get the full recipes and more!

This site uses Akismet to reduce spam. Learn how your comment data is processed.

Learn the secrets of Indian Cooking at
Indian Culinary World

Join the online course for only $9.99